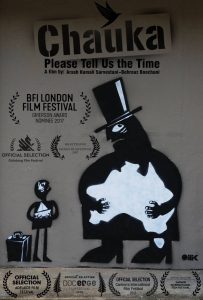 A film by: Arash Kamali Sarvestani and Behrouz Boochani

(co-director Arash Kamali Sarvestani will be in attendance, with Behrouz Boochani joining via live stream)

Accessibility: The venue is accessible to people with mobility devices. The large majority (over 90%) of the film includes subtitles. For a small number of English language scenes subtitles are not currently available. A transcript of these portions of the film, with time stamps, will be available at the venue.

Arash Kamali Sarvestani is an Iranian Dutch Filmmaker and Video Artist. Arash was born in Tehran, Iran on 1981. He has studied Cinema in Art University of Teheran.  Arash came up with the idea of making a film from inside a refugee camp. He was curious to know if it is possible to make a movie about refugees using only mobile phone cameras inside a camp that looks more like a prison. After two years of investigation about refugees kept by Australian government in Manus and Nauru camps Arash eventually found Behrooz Boochani who was (and still is) detained in Manus camp. Arash shared the idea with Behrooz. The first feature movie of Arash “Chauka, Please tell us the time” is a result of their cooperation.

Behrouz Boochani is an Iranian-Kurdish journalist, human rights defender, poet and film producer. He was born in western Iran. He was held in the Australian-run Manus Island detention centre from 2013 until its closure in 2017, and has remained on the island since then.

Boochani is the co-director, along with Iranian film maker Arash Kamali Sarvestani, of the documentary Chauka, Please Tell Us the Time, has published numerous articles in leading media internationally about the plight of refugees held by the Australian government on Manus Island, and has won several awards.

His memoir, No Friend But the Mountains: Writing from Manus Prison, won the Victorian Prize for Literature and the Victorian Premier’s Prize for Nonfiction in January 2019. The book was tapped out on a mobile phone in a series of single messages over time and translated from Persian into English by Omid Tofighian.

Copies of the award winning book  No Friend But The Mountains: Writing from Manus Prison by Behrouz Boochani will be available for sale